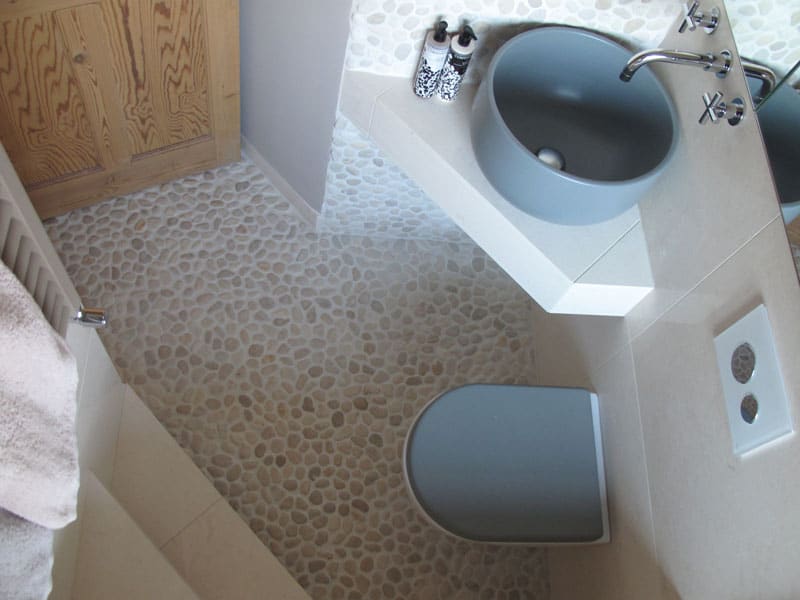 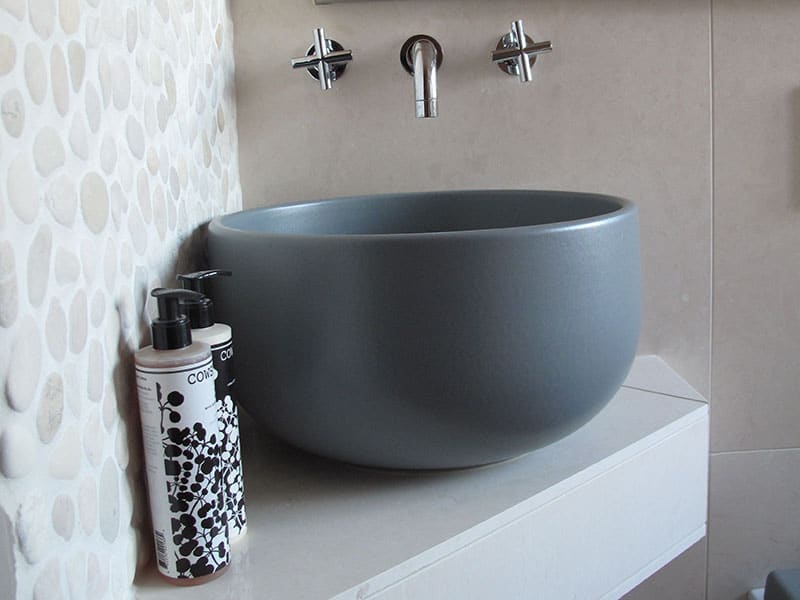 I was asked us to ‘do the impossible’ (her exact words), and create a spa like bathroom. That’s all she wanted to tell me, as she couldn’t work out in her head how it could work. She desperately wanted a bath and storage.

The original shower room was awkward, with a 90×90 quadrant shower taking over the space as you entered, squeezing past to be faced with a basin and WC. You literally can’t swing a cat in here was my first thoughts, although driving home from my first consultation I was nervous after being all flamboyant promising her a beautiful relaxing space when I was finished.

The total width of the room only being 1400mm by 1900mm so my first thought was to panic, how on earth was I going to fit a bath in here!

I flipped the room and decided to specify the Omnitub, a Japanese style soaking tub. It’s a perfect size (as the client is only 5’8) and deep too, so ticked the spa style. That allowed me 1250 for the basin and WC. All good, but I hate the furniture that sits next to the WC, and a wall mounted basin would be too tucked into the corner. I wanted to make sure that nothing felt squeezed in, or tight fitting. Flaminia do a lovely Lava grey porcelain vessel basin (saltodacqua), which is really good depth, and 420mm in diameter.

The WC is a short projection, so sits well within the space.
By creating studwork to house the WC cistern, it also allows for a large triple door recessed mirror cabinet. Doors are all on a push to open, so less visual / actual clutter. Anyway, back to the basin I needed to make sure that when you use the basin you’re not tight to the wall, so here was the idea (or where it came from). As you look into the room there is a ‘corridor’ section so to speak. This angle is used to start the countertop for the basin to sit on, and is only 500mm deep (allowing 750mm for the WC).

This is also the idea behind the steps on the bath, they too following form the corridor section, to pull the eye into the room. They all, including the basin shelf, have lights underneath to pool the floor with light.

The control for the bath / shower is on the right, quite a job chasing it into the wall, but making sure that client can control everything before getting in. There is no bath spout (no clutter on the bath ledge) an overflow filler does that job, with a riser rail and a shower rose. (the window ledge is angled to allow water to run off)

The radiator is by Bisque, in the beige quartz finish. I think a chrome rail might have been a little to heavy visually. Soft tones, to work with the grey porcelain work better.

The bath has a fixed bath screen, from bath ledge to ceiling, something a little different, but also for the more bespoke feel, I don’t that an ‘off the shelf bath screen’ would do the trick.

The pebbles! Now the pebbles were to give the feeling of a spa, but also, they are lovely to walk on. I wanted to do more than just the floor, so the wall behind the basin now becomes a feature. A simple limestone, plain, chic yet not expensive, so good for the budget.

When it was being built, some people were nervous as it is such a small space, yet now it’s in, it’s a prefect little gem. It feels bigger than it is, and punches above its weight in value for money. The client was speechless and still can’t believe it all fits.
I am now a fan of pebbles.