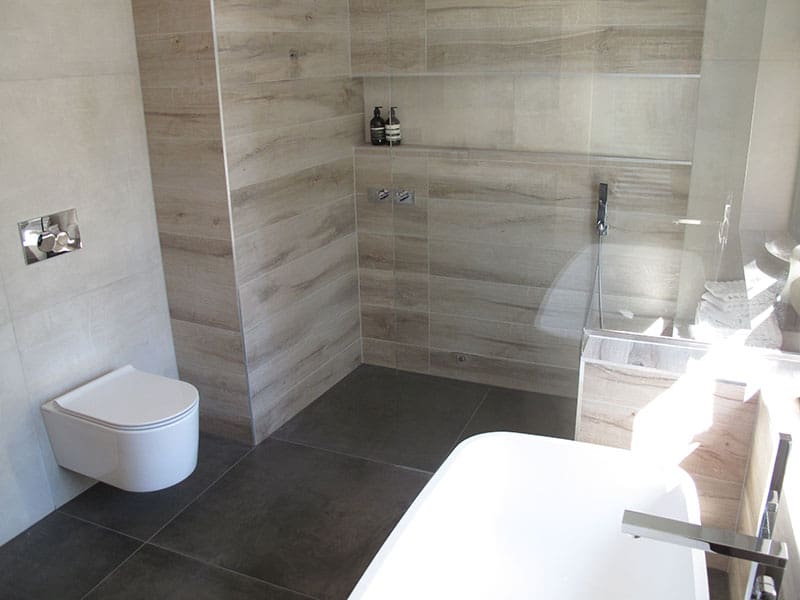 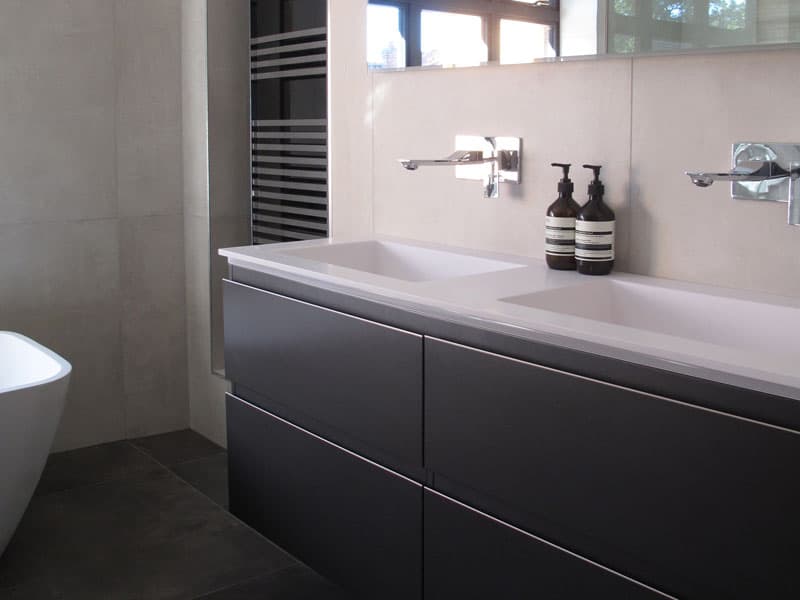 A newly wed couple renovating their home in Chew Stoke. The original house was a 1970’s detached property having a new extension, and complete rebuild.

Using what was one of the original bedrooms of the house, create a Master en suite which is interesting, light and usable. Nothing too busy, and clean simple lines (handless) items preferred.

I started thinking about working with 2 axis, one which would create interest, and allow a large shower area, where the glass isn’t too close to the window. (there is only 950mm to the left of the window. I wanted to give the clients a nice recess in the shower the 2 axis idea works really well. You can see that the boxing behind the bath runs from the leading edge of the window. Its designed to run into the window frame, creating a nice sized window ledge. On this same axis is the shower seat, with the shower waste underneath so leaving the floor as visually uncluttered as possible.

The basin is made from a composite material and is a matt finish, it’s a subtle soft finish working perfectly with the freestanding bath by Bagno Design, also a matt finish. The brassware used has a simplicity to it which I liked, the spout on the basin strong, yet not too heavy. Wall mounting them leaves space around the basin so less cluttered. The bath filler was again by Bagno Design, working well with the budget, as its less than £1000. The rose is ceiling mounted, again to keep it simple and clean visually. The thermostatic shower mixer is a horizontal 2 handle with a narrow backplate which isn’t ‘trying’ too hard. The bench style seat is lit from beneath.

The glass was bespoke, and designed on the same axis as the bath to allow for the shower width, however the wall is created on both axis so tapering to the end. This works with the ceiling where it drops in the shower. I created a shadow gap light to highlight the interesting angles running in the leading edge of the window.

Then came the tiles, and making them work within the space. The clients mentioned they liked wood, so I found the Kuni tile which has a texture to it the emulates wood perfectly. Its designed to run from the corner where the WC is, then interacting with the concrete effect tiles and as you look around the room they interlock with each other ending in the simple basin wall, which has enough on it visually so no wood needed!. The wood was on the axis (boxing in the shower, and the bath)

I used 2 large 120×120 tiles for the shower base so there are no odd cuts as I was aware of the 2 axis maybe clashing on the tiling for the floor.

60×60 concrete tiles are effortlessly simple, with the darker shade on the floor anchoring the scheme together, but also working with the vanity unit, which, on its own would be a beast in the anthracite.

The lighting allows for soft light whilst bathing (light under shower seat, under vanity & recess lighting) to task lighting such as ceiling spotlights (trimless for the uncluttered look) lighting in the mirror.

It’s a welcoming space, with areas of interest which isn’t leaning towards the more ‘contrived’ but more subtle, chic and soft.

The client is over the moon when they arrived home from their honeymoon to a finished room.